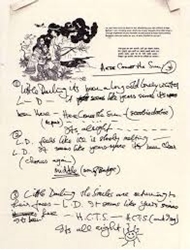 By the late 1960s, George Harrison had come to a realization: He could match the songwriting efforts of John Lennon and Paul McCartney. Beatles fans probably started to see that around the days of Revolver (1966). By the time Abbey Road (1969) went out, there was no denying it.

With “Something” and “Here Comes the Sun,” George no longer needed to prove his case. And indeed he’d learned some tricks from John and Paul. One such trick was starting with someone else’s line to get a song’s lyrics going.

Just as John had done with an Elvis Presley line on “Run For Your Life,” so George did with a James Taylor line at the start of “Something.” And he also ran with one of John’s lyrics to start “Here Comes the Sun.”