The love story behind the classic song 'Layla' 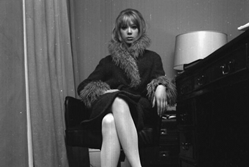 The two had met in the late 1960s, when Boyd was married to Clapton's close friend, George Harrison. Clapton fell in love with Boyd, but at the time, she wouldn't leave Harrison to be with him.

Clapton penned the song "Layla" about his feelings for Boyd. According to author Barry Hill, Clapton was inspired by a poem called "The Story of Layla and Majnun," which portrayed the poet as a man driven to madness by his unattainable love.