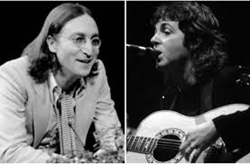 There are a lot of ‘almost’ moments in rock and roll history, one that has always hung heavily over our heads was the very real moment Saturday Night Live nearly reunited The Beatles, had John Lennon and Paul McCartney been bothered to get up from watching it on TV.

In the iconic first series of ‘Saturday Night Live’ – America’s home of alternative weekend hilarity – show’s legendary producer, Lorne Michaels set himself a fairly big challenge: to reunite The Beatles. He started as any SNL act would, with a piece direct to camera.

Whether Michaels was performing with the real intent of reuniting the most enigmatic songwriting partnership to have ever existed in Lennon and McCartney, or he was just doing a bit, he shared the sentiment of a nation. Michaels talks directly to the camera about how The Beatles had affected so many lives, “In my book, The Beatles are the best thing that ever happened to music. It goes even deeper than that — you’re not just a musical group, you’re a part of us. We grew up with you.”