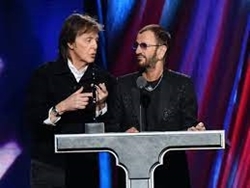 Once Ringo Starr took over the drum kit, The Beatles had the right lineup to take over the world. His impressive drum skills allowed the Fab Four to tackle complex rhythms, such as on “Tomorrow Never Knows” and “Come Together,” later in their career. Still, The Beatles had to ditch their first drummer, Pete Best, before bringing Ringo into the fold. Paul McCartney remembered the exact moment and song that proved Ringo was the perfect drummer for The Beatles.

The Beatles famously played several residencies in Hamburg, Germany, but they weren’t the only band from Liverpool entertaining the Germans.

Before he joined the Fab Four, Ringo drummed for Rory Storm and the Hurricanes. The band earned a positive reputation in Liverpool and Germany (and had fancy pink suits that helped them score better beds in Hamburg). The two groups knew each other from England, and they played some of the same clubs in Germany in the early 1960s.