The Runaway Girl The Beatles Wrote 'She's Leaving Home' About 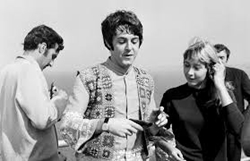 For the Sgt. Pepper’s Lonely Hearts Club sessions, The Beatles wrote several songs based on newspaper articles they’d read. In the most famous example, John Lennon combined stories about a car wreck and a call for public improvements (4,000 potholes in Blackburn) on “A Day in the Life.”

But the list only begins there. On “Lovely Rita,” Paul McCartney invented a fictional meter-maid based on an article he read about that new profession (circa 1967). And Paul once again turned to the papers when he wrote “She’s Leaving Home.”

While Paul had invented his fictional band led by Billy Shears for the album’s concept, he had a real-life subject in mind when telling the story of a wealthy runaway girl. And the craziest part is, Paul had met the same girl four years earlier while making a TV appearance.