The 'Sgt. Pepper's' Song by Paul That John Lennon Would 'Never Dream of Writing' 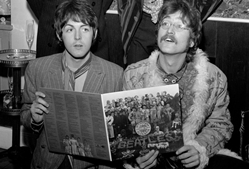 On every Beatles album, you see the majority of songs credited as Lennon-McCartney tunes. However, after the early days of John and Paul writing “I Want to Hold Your Hand” and other tracks “nose to nose,” most songs came from one songwriter or the other.

Few would mistake “Come Together” for a Paul McCartney tune. Likewise, the idea that John Lennon could have written “Your Mother Should Know” seems insane at this point in time. Nonetheless, the publishing deal had both men credited on all Beatles tracks they wrote.

After The Beatles broke up, that led to a lot of confusion. John spoke of how people kept telling him how great “Yesterday” was. Over the years, he became exhausted trying to explain it wasn’t his. (He liked Paul’s classic tune but never wished her wrote it.”)

When he ran through who wrote what on all the Beatles albums, there were some songs John simply laughed about. In fact, he said he “would never even dream of writing” one Lennon-McCartney track from Sgt. Pepper’s Lonely Hearts Club Band.