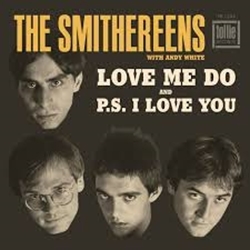 When The Smithereens make music, they do it right. And it shines on their newest release, a special one-off two-song covers record of The Beatles’ 1962 single “Love Me Do” and “P.S. I Love You,” featuring session drummer Andy White, who originally performed on the two songs. Best of all for fanatics and collectors, the songs are available on 45 RPM vinyl, pressed on the Tollie label with picture sleeve, which pays tribute to original American release by the Fab Four.

The British Invasion sound permeates the Smithereens’ music, and it was a thrill for the band members to find out that White, one of the few who could actually claim to be the Fifth Beatle, had married an American woman and was living in New Jersey. The band became friendly with the legendary British drummer (Tom Jones, Herman’s Hermits, Petula Clark) and even had him guest on several special live shows before he passed away in 2015.