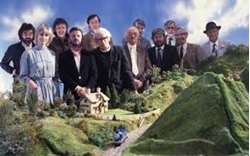 The beloved anthropomorphic steam engine, a favourite of generations of children, first appeared in the Reverend Wilbert Awdry’s The Railway Series books, originally published in 1945.

The TV adaption arrived in 1984 and proved a hit with viewers, with the colourful cast of characters – including engines Thomas and Percy, as well as railway overseer the Fat Controller – captivating young audiences.

Thomas & Friends celebrates its 75th anniversary on Tuesday and to mark the occasion here are some of the show’s best celebrity guests: RINGO STARR