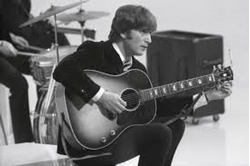 Elvis Presley became both famous and infamous — and John Lennon wasn’t always a fan. He and the other Beatles went out of their way not to mimic Presley in a very specific way. In addition, John felt Mick Jagger replicated one of Presley’s mannerisms that he couldn’t stand.

John opened up about so much in a 1971 interview with Rolling Stone, where he discussed everyone from Judy Collins to Bob Dylan to Chairman Mao Zedong. He made some surprising comments about Presley and how he moved. Presley was known for swiveling his hips — an act which many people felt was too sexual back in the 1950s.

Initially, the Beatles had some interesting stage antics of their own. “When we were younger, we used to move, we used to jump around and do all the things they’re doing now, like going on stage with toilet seats and sh*tting and p*ssing.” However, the Beatles deliberately wouldn’t movie like Presley.