What George Harrison Thought of John Lennon's Comments About His Memoir 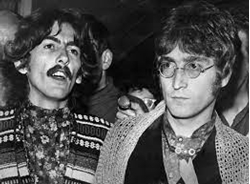 George Harrison knew his 1980 memoir, I Me Mine, upset John Lennon. Months before he died, John admitted the book hurt him because George hardly mentioned him. He claimed he’d influenced George and helped him write songs.

However, George said John overestimated how much he influenced him.

In 1980, John told Playboy that George’s memoir hurt him. He was upset that George barely mentioned him, even though he’d acted like George’s big brother.

John said (per Beatles Interviews), “I was hurt by George’s book, ‘I, Me, Mine.’ He put a book out privately on his life that, by glaring omission, says that my influence on his life is absolutely zilch and nil.

“In his book, which is purportedly this clarity of vision of his influence on each song he wrote, he remembers every two-bit sax player or guitarist he met in subsequent years. I’m not in the book.” Playboy asked why.