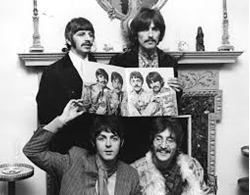 Certain album covers are iconic. Everyone remembers Michael Jackson posing on the cover of Thriller and a baby reaching for a dollar bill on the cover of Nirvana‘s Nevermind. The cover of the Beatles’ Sgt. Pepper’s Lonely Hearts Club Band arguably stands as the most famous album cover of all time. What might shock fans is that John Lennon wasn’t allowed to realize his vision for the cover. In an interview with GQ, Sir Paul McCartney remembered how “I mean, on the Sgt. Pepper cover he wanted Jesus Christ and Hitler on there. That was, ‘Okay, that’s John.’ You’d have to talk him down a bit — ‘No, probably not Hitler…’ I could say to him, ‘No, we’re not doing that.’ He was a good enough guy to know when he was being told.”

When asked why John wanted Hitler on the cover, Paul replied “It’s a laugh. We’re putting famous people on the cover: ‘Hitler! He’s famous!’ And it was like, ‘Yeah, but John, we’re trying to put heroes on the cover, and he’s not your hero.’”