What We Can Learn From Yoko Ono This Valentine's Day 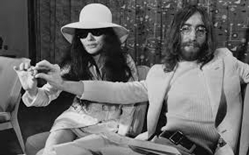 Seemingly everything is “a little different this year.” As we prepare for the first Valentine’s Day in a pandemic, we should not despair at the modified traditions and instead learn from the liberated work of Yoko Ono, a woman who embraced the unconventional in her art, compelling her audience to engage with the strange, beautiful and disturbing elements of life in ways that make the mundane feel unexpected.

An influential member of the Fluxus art movement, Ono helped pioneer a genre of conceptual art consisting of performative instructions that emphasize artistic process and replicability. These works empower anyone to act out a work of art or merely imaginatively engage with the poetic instructions. Many of these works, known to Ono as “scores,” were published in her 1964 collection “Grapefruit” and made widely available in cheap pamphlets.