Who John Lennon Was Singing About on the Beatles' 'Sexy Sadie' 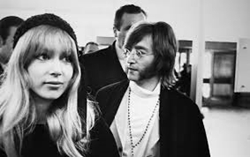 If you wondering about the subject of a particular Beatles song, you have to take things on a songwriter-by-songwriter basis. In the case of Paul McCartney, chances are the song is about a fictional person.

That’s definitely the case in “Lovely Rita,” the meter maid Paul invented for his upbeat Sgt. Pepper’s song. In The White Album’s “Blackbird,” Paul said he was singing about black women facing oppression in the South during the Civil Rights Era (something few would have guessed).

But with John Lennon it was different. John often got material from his own life. Whether it’s “”She Said She Said” or “In My Life,” John was telling autobiographical stories by his mid-’60s work.

During the Beatles’ 1968 trip to India to study with the Maharishi, John wrote several songs based on real people. “Dear Prudence,” for example, was about Mia Farrow’s sister. And he addressed “Sexy Sadie” to the Maharishi himself.