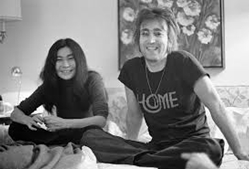 John Lennon’s official Instagram page has revealed an unseen photo of him when he got a special birthday gift from Yoko Ono in 1980. The photo was taken by Bob Gruen.

Here’s the caption of photo:

John proudly showing off the birthday presents he had just received from his wife Yoko – An 18K yellow-gold Patek Philippe Moon Phase 2499 wristwatch, a hand-knitted tie and an American flag tie-pin.

See the photo below.

Back on February 19, John Lennon’s sister Julia Baird has shared her thoughts on biggest misconception about Yoko Ono

“In your opinion is it unfair to blame the breakup of the Beatles on Yoko Ono?”