The tenth and final concert of the 1965 North American tour, at the venue which had opened the 1964 itinerary. There were two shows - a matinee seen by 11,700 and an evening performance seen by 17,000. The Beatles flew home during the evening of September 1st, landing at London Airport the morning of the 2nd, and then enjoyed almost six week's break without work.

This was The Beatles' third and final concert at the Hollywood Bowl in Los Angeles, California, following performances on August 23, 1964 and August 29, 1965.

The other acts on the bill were, in order of appearance, King Curtis Band, Sounds Incorporated and the Discotheque Dancers, Brenda Holloway, and Cannibal & The Headhunters.

As with the 1964 concert, the two August 1965 performances were recorded by Capitol Records. Five songs from this date - Twist And Shout, She's A Woman, Dizzy Miss Lizzy, Can't Buy Me Love and A Hard Day's Night - were included on the 1977 album The Beatles at the Hollywood Bowl.  Dizzy Miss Lizzy was a composite edit of the 29 and 30 August performances.

The performance of Baby's In Black was also included on the 1996 single Real Love, preceded by John Lennon's spoken introduction from the 29 August performance. The Hollywood Bowl recordings were also used to bulk up the sound of the film The Beatles At Shea Stadium, and were incorporated into the soundtrack on January 5, 1966.

After the concert The Beatles held a pool-side party for around a dozen reporters who had accompanied them on the North America tour. The final stop took place the following night at San Francisco's Cow Palace.

The Beatles had performed a triumphant show at Los Angeles' Hollywood Bowl on August 23, 1964.  A little over a year later, they returned for two further sell-out shows.

In the afternoon of 29 August 1965 they gave a press conference at the Capitol Tower at Hollywood and Vine. Alan Livingston, president of Capitol Records, presented them with gold discs for sales of Help!

Following the press conference The Beatles were driven by armoured truck to the Hollywood Bowl. The show was attended by 18,000 fans; one gave birth to a baby boy in the car park outside the venue.

Late in the evening of August 27th, the group drove across to Perugia Way, Beverly Hills, to meet their one-time idol Elvis Presley, a summit conference arranged by Presley's manager, "Colonel" Tom Parker, and greatly anticipated by the Beatles and Brian Epstein.

It took place at Presley's mansion at 565 Perugia Way, Bel Air, Los Angeles. The Beatles arrived at 11pm and were greeted by Elvis in his large circular living room. The room was bathed in red and blue light, and contained a colour television, jukebox, crescent-shaped couch, games tables and a bar.

The encounter was not a great success, with a somewhat stilted atmosphere and little conversation at first. Eventually Elvis told them, "If you damn guys are gonna sit here and stare at me all night I'm gonna go to bed." With the ice broken, Presley called for guitars to be brought out and a brief jam session took place. Among the songs performed was You're My World, a ballad which Cilla Black had recorded in 1964.  A poor-quality tape has long been rumoured to exist, although this has never been confirmed and must be considered unlikely.

Paul had already spoken to Presley - and perceived his now decidedly unmagnetic personality - during a telephone conversation from the group's Atlantic City hotel to Memphis on August 31, 1964.

The Beatles still taking a (much needed) rest before the concert in San Diego.

This was The Beatles' third rest day in Los Angeles. They were halfway through a five-day break in their 1965 tour of North America, staying in a mansion owned by actress Zsa Zsa Gabor at 2850 Benedict Canyon, Beverly Hills.

After the events of the previous day, in which the group took LSD with The Byrds and Peter Fonda, this was a day of rest. The Beatles had breakfast in the early afternoon, and spent much of the rest of the day sunbathing and swimming in the pool.

One brief moment of drama took place when two girls, who had hired a helicopter to fly over The Beatles' rented home, jumped from it into the swimming pool. Brian Epstein complained to Los Angeles police, and a no-fly zone was ordered around the area.

This was The Beatles' second day off during their five-day break in the 1965 North America tour. They rented a house owned by Zsa Zsa Gabor at 2850 Benedict Canyon, Beverly Hills, where they were visited by a number of people.

This was the day on which John Lennon and George Harrison had their second LSD experience. Ringo Starr tried the drug for the first time, although Paul McCartney did not partake on this occasion.

Among the visitors on this day were Eleanor Bron, whom had appeared with The Beatles in Help!, Roger McGuinn and David Crosby of The Byrds, and Daily Mirror newspaper journalist Don Short.

Indian music and LSD were key influences in the changes in The Beatles' music between 1965 and 1968. The drug, in particular, played a pivotal role in the group's studio experimentation for Revolver and Sgt Pepper's Lonely Hearts Club Band.

According to George Harrison, he and Lennon had decided that the other Beatles should experience LSD, which they had previously taken in London sometime between March and July 1965.

Although McCartney was wary of the experience, Starr embraced it enthusiastically. Despite the general party atmosphere, police and security were stationed around the house to keep fans away. In addition, not all The Beatles' visitors were aware that the group was on LSD.

Between the morning of August 23, 1965 (when they flew into Los Angeles) and the next concert on August 29, 1965, the Beatles enjoyed a clear break, resting in a massive house. Amid tight security, in Benedict Canyon in Hollywood, California.

In the morning of 22 August 1965 The Beatles held a press conference at Minneapolis-Saint Paul International Airport, before flying to Portland, Oregon.

Shortly before their arrival in Portland one of the four engines on their Lockheed Electra aeroplane caught fire. John Lennon was frightened enough to quickly write a few messages which he enclosed in a film canister for safety. Fortunately for all, the plane landed without further incident, and a relieved Lennon was heard to shout: "Beatles, women and children first!"

The Beatles performed two shows at Portland's Memorial Coliseum, before a total of 20,000 people. Tickets for each of the shows were priced at $4, $5 and $6. There were also a number of pink tickets for the Coliseum's upper level which were free.

The concerts took place at 3.30pm and 8pm. The Beatles' setlist featured 11 songs. Additionally, the second show opened with a truncated version of Twist and Shout.

The support acts on the bill were Brenda Holloway and the King Curtis Band, Cannibal & The Headhunters, and Sounds Incorporated.

Among The Beatles' guests backstage were Carl Wilson and Mike Love of The Beach Boys. 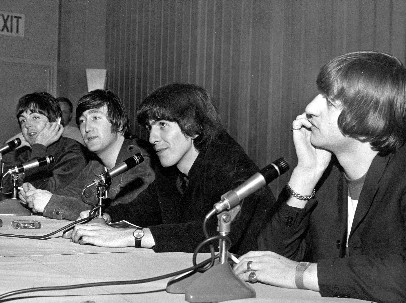