Officials in Colombia took no risks when SIR PAUL McCARTNEY landed in the country last week (ends22Apr12) - 1,400 police officers were designated to help protect THE BEATLES legend.
The rocker headed to South America as part of his On The Run tour earlier this month (Apr12), and jetted into Colombia last Thursday to play a sold-out gig at the El Campin Stadium in Bogota.
And authorities ensured McCartney would come to no harm in the city - which has one of the highest crime rates in the world - by ordering a "ring of steel" to surround the star at all times during his two-day visit, according to the Daily Telegraph.
A source tells the newspaper, "From the moment Paul's plane landed to the moment he left, officials designated 1,400 police for the whole two days.
"It is a massive secu details
Sir Paul McCartney signs fan’s neck for tattoo - Tuesday, May 01, 2012

SIR Paul McCartney proved to be a pain in the neck for a female fan as she took away a permanent reminder of her encounter with the superstar.

The 69-year-old former Beatle pulled a young woman from the crowd as he performed at a huge stadium concert in Recife, Brazil, and she asked him to sign her neck.

Natalia Lobo, 21, then rushed off to a tattoo parlour to have his autograph inked on her skin forever.

DHAKA, Bangladesh — Hidden from view along a side street in this dusty, traffic-choked metropolis of 12 million people, Dhaka’s Liberation War Museum seems an unlikely place to honor the memory of George Harrison.

Yet here, in a second-floor gallery crammed with glass cases full of aging rifles, machine guns, spears, bayonets and other weapons of war is a bronze plaque dedicated to the “quiet Beatle” who preached love and compassion.

A former Beatle and a former Eurythmic are making a musical with Paramount. The studio has picked up Hole In The Fence from Ringo Starr and Dave Stewart. The coming-of-age drama is about a group of kids who form a band to escape their depressing mining town. 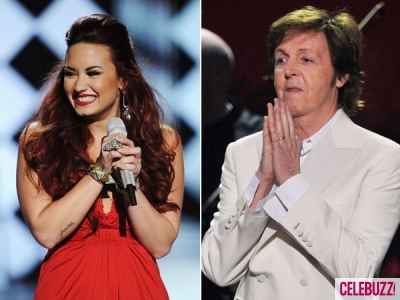 The Skyscraper hitmaker couldn’t believe her eyes when she spotted the Beatles legend in Los Angeles and nearly mowed him down with her car.

The excited star then took to her Twitter.com page to tell fans about the encounter with her hero.

She tweeted, “So… today I was pulling into details