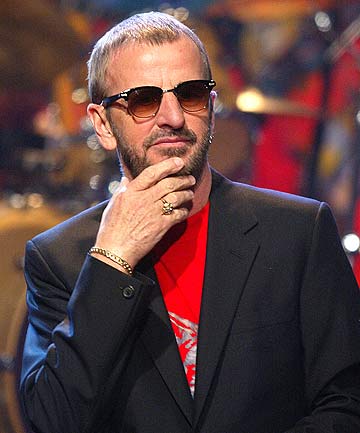 Ringo Starr and the 2012 edition of the All-Starr Band will play two shows in New Zealand in February 2013--marking Ringo's first performances there since the Beatles' 1964 tour.

If something sounds familiar about those dates, it's because they will be the 49th anniversaries of the Beatles' arrival in the US and famous first performance on "The Ed Sullivan Show", respectively!

For more on this story, go to: Full Story

details
Release of "The John Lennon Letters" Gets Some Flak - Sunday, October 14, 2012

For more on this story, go to: Full Story

Peace activist Ono said the LennonOno Grant for Peace, established in the name of her late husband, former Beatle John Lennon, rewarded Lady Gaga for combining stardom with activism and changing "the mental map" of the world.

"Lady Gaga is in a position of number one as a singer songwriter," Ono told Reuters Television. "And when you are number one you don't want to risk yourself. And she did."

Grammy-winning Lady Gaga, who shot to fame with her debut album "The Fame" in 2008, accepted the puzzle-shaped award in Reykjavik along with a monetary prize that she said she will give to the Elton John AIDS Foundation

Gaga said she would continue to "communicate compassionately to the world and its leaders," and dedicated the award to "youth empowerment around the world."

"I dare you to be compassionate in a cynical age," she added.

Last month, at an event in New York City, Yoko Ono awarded the prize to the members of Pussy Riot. Nadezhda Tolokonnikova, Maria Alyokhina and Yekaterina Samutsevich were sentenced to two years in jail in details

The Beatles had no engagements today (John's 22nd Birthday) they stayed over in London, visiting freelance music journalists and the weekly pop/music papers to promote 'Love Me Do"

The Beatles 50 Years ago Today (BeatlesRadio.com)

The Beatles lunchtime booking at the cavern club Oct 8th was canceled because they were headed for London for the Debut appearance on Radio Luxembourg:

In the early 60s a appearance on the influential Luxembourg station (which had a medium and shortwave service) beamed directly at Britain and aimed and marketed at the British Public:

Record companies could buy Programs on air for exclusive promotion of their Artists and discs among other shows EMI had "The Friday Spectacular" for which this debut appearance by New group "The Beatles" was recorded and taped on a Monday evening in front of an audience of more than 100 sitting or dancing Youngsters in a small ground-floor studio inside EMI's Central London headquarters despite the presence of the Artists only records were played on the show:

Never-before seen photos of John Lennon taken on location in Spain in 1966 have been published by the UK's Daily Mail.
The photos of John, in costume as Pvt. Gripweed and wearing his soon-to-be-trademark round glasses, show him in relaxed moments between takes--inculding one shot of John swinging a cricket bat.

The 1877 Steinway grand piano used on so many classic Motown recordings has been restored to playing--and recording--quality, thanks to Paul McCartney, who along with Motown founder Berry Gordy, played the piano at a fundraising gala in New York City.  Paul had told Motown Museum officials last summer than he wanted to help with the restoration when he learned the instrument could no longer be played. It took Steinway techs months to restore the 9-foot piano to its former glory. McCartney & Gordy played the Motown/Beatles classic, "Money (That's What I Want)", as well as "Hey Jude" and "Lady Madonna".

Paul McCartney delighted workers at his wife's family business in New York State, making the rounds at the trucking company and posing for photos. Paul accompanied his wife, Nancy, to Syracuse, NY, as she attended a meeting at New England Motor Freight, the trucking company owned by her father, Myron Shevell, and of which she is Vice President of Administration. Syracuse-area media reported that the McCartneys flew in on a private jet and spent several hours in the area, and had lunch with employees.  Photos of Paul posing with employees soon hit Facebook, as well as local media websites.

Tapes recorded 52 years ago by Ringo Starr's first band, Rory Storm & the Hurricanes, will be released as an album--the first ever from the group.  The BBC reports that the tapes, recorded in March 1960, were found by Rory's sister in her attic.