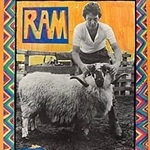 Paul McCartney was used to adoration as a member of The Beatles. The dozens of songs he wrote sold millions of copies and generated critical acclaim as some of the best pop music ever written. So, imagine his surprise when his first solo effort after the breakup of the Fab Four was critically slagged. And imagine his further surprise when his second solo effort, “Ram”, released in 1971, was also put through the critical wringer. Granted the bar for the guy who wrote Yesterday, Eleanor Rigby and The Long & Winding Rd is going to be higher than for most other artists but the dislike for this record was almost universal within the music press.

Jon Landau in Rolling Stone called it “incredibly inconsequential” and monumentally irrelevant” and “emotionally vacuous”. New Music Express said it was “an excursion into almost unrelieved tedium” and Robert Christgau called it a “bad record” Oh, and John Lennon(feuding with Paul at the time) called it “muzak”.

The Beatles star took to Instagram to share a black-and-white photo of the pair in a recording studio laughing, alongside a personal message.

The music icon wrote: "So sad to hear of the passing of my friend Al Schmitt.
"Al was the lead engineer in charge of the 'Kisses on the Bottom' session and was a fantastic guy besides being one of the world’s great engineers.

"He always had a twinkle in his eye and was ready for a laugh but most importantly when we had done what we thought was a good take and went into the control room to hear the playback it sounded fantastic. His self-effacing skills always came through.

details
George Harrison's 1st Wife Did 'Something He Had Always Forbidden' After His Affair With Ringo ... - Monday, May 03, 2021 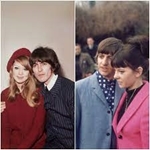 In 1973, former Beatle George Harrison began a brief affair with the wife of his still-close friend and previous band mate Ringo Starr.

Starr’s reaction was to go carousing with John Lennon in L.A.

The other injured party, Harrison’s wife Pattie Boyd, discovered the most effective revenge against her husband. She threw herself into something he had strictly forbade her to do throughout their marriage.

In 1971, Starr bought John Lennon’s Tittenhurst Park estate from his band mate. The drummer and his wife entertained often there and it was during one of these evenings that the 26-room Berkshire home became the location for the beginning of the end of the Starrs’ marriage.

In her book Miss O’Dell: Hard Days and Long Nights with The Beatles, The Stones, Bob Dylan and Eric Clapton, author Chris O’Dell, who was an employee of the Beatles’ Apple Corporation and good friend to the Harrisons and Starrs, documented the unsavory incident.

details
The Beatles Almost Had Roles in This Classic Disney Movie - Monday, May 03, 2021

At the height of their fame, The Beatles were offered prominent roles in Disney‘s The Jungle Book. The animators specifically designed characters that resembled each Beatle member, including Paul McCartney, Ringo Starr, John Lennon, and George Harrison. But as we now know, the musicians refused to take on roles in the Disney classic.

While it is now much more common for A-list celebrities to appear as voice actors in animated films, it was much less common back in the 1960s. In fact, it wasn’t until the 1990s that notable celebrities started to take on roles as voice actors. Robin Williams, who mastered his role as Genie in Aladdin, was one of the first big stars to accept work as a voice actor.

“I’m doing it basically because I want to be part of this animation tradition,” Williams said, according to The Los Angeles Times. “I want something for my children.”

Similarly, The Beatles were given the opportunity to be in The Jungle Book.

details
Ringo Starr reveals which Beatles song is his favourite - Monday, May 03, 2021

Ringo Starr has named his favourite Beatles song during an appearance on The Late Show With Stephen Colbert.

The legendary drummer revealed the track during Colbert’s 15-question ‘The Colbert Questionert’ – a segment he initially recorded when he appeared on The Late Show back in March.

Colbert asked Starr: “You get one song to listen to for the rest of your life. What is it?” The Beatle quickly answered: “[The Beatles’] ‘Come Together’.

“There’s lots of other favourites, but if you want one, ‘Come Together’ can’t be bad,” Starr said, adding that it was his favourite Beatles song. “I just think it worked perfectly with the band and the song and John being John. I loved that moment.”

Starr also shared his unique take on the afterlife after Colbert asked him what happens when we did. “I think we go to heaven,” Starr said. “Heaven’s great, but you don’t stay there too long; you just gotta get yourself together again and come deal with all that [shit] you didn’t deal with last time you were here.”

The Beatles net worth: Incredible ways the Beatles made even more money outside the music - Monday, May 03, 2021

In the many decades since the band split in 1970, their music has remained as popular as ever, although Beatles royalties varied, with Lennon and McCartney having most of the songwriting credits. All four had successful solo careers. Paul also formed the band Wings, George formed the Traveling Wilburys with Jeff Lynne, Roy Orbison, Bob Dylan and Tom Petty, and Ringo had his All Starrs band. In 1995 and 1996 the three surviving Beatles also released the three retrospective Anthology albums (and lucrative TV series). The first album alone went 8x Platinum in the US, with sales of over 3.6million. Together with the Beatlejuice radio show host Geoff Johns, we look at how the four musicians all diversified beyond their own music, to generate wealth in sometimes surprising ways.

Sean used the Spotify Canvas medium to create the series of animated loops, collectively titled “I Am the Egbert,” which you can view using the Spotify app on mobile devices.

The animations were designed to accompany the Plastic Ono Band album’s 11 tracks and the three singles John released prior to the record — “Give Peace a Chance,” “Cold Turkey” and “Instant Karma! (We All Shine On).” The series follows a character named Egbert, whose experiences follow closely the themes and sentiments John expressed in the aforementioned 14 songs.

“I Am the Egbert” was put together by Sean in collaboration with the team that created the Oscar-nominated 2007 animated short “I Met the Walrus,” which was inspired by Jerry Levitan‘s experience meeting and interviewing John and wife Yoko Ono in 1969 when, at age 14, he sneaked into the couple’s Montreal hotel room during their famed “Bed-In for Peace” protest.

The Beatles’ movies are generally comedic and whimsical, however, one of them made John Lennon and Yoko Ono cry. Interestingly, they were in the presence of another famous person when they wept in the theater. Here’s that celebrity’s insight into why John and Yoko were so affected by the movie.Lennon Remembers is a long interview John gave to Jann S. Wenner, one of the co-founders of Rolling Stone and a major celebrity in the world of classic rock. In his introduction to the 1971 version of Lennon Remembers, Wenner discusses working diligently on the interview over the phone. He met John and Yoko Ono some time after speaking to John on the phone.

Ringo Starr revealed his favorite Beatles song and his thoughts on the afterlife during a bonus interview from the drummer’s recent virtual visit to The Late Show.

Taking part in Stephen Colbert’s 15-question “The Colbert Questionert” — a segment Starr initially recorded when he appeared on The Late Show in March — the host asked Starr, “You get one song to listen to for the rest of your life. What is it?” Starr quickly replied, “[The Beatles’] ‘Come Together.'”

“There’s lots of other favorites, but if you want one, ‘Come Together’ can’t be bad,” Starr said, noting it was his favorite Beatles song. “I just think it worked perfectly with the band and the song and John being John. I loved that moment.”

Starr also shared his unique take on the afterlife when Colbert asked him what happens when we die. “I think we go to heaven,” Starr said. “Heaven’s great, but you don’t stay there too long; you just gotta get yourself together again and come deal with all that [shit] you didn’t deal with last time you were here.”

The Beatles: George Harrison was not happy with a Paul McCartney track - Thursday, April 29, 2021

By the time The Beatles’ 11th album, Abbey Road, was released in September 1969, the band had been writing songs for almost a decade. Each of the members had worked hard on their own tracks as well as collaborative efforts. One of the stronger songwriters in the band was George Harrison, who penned such hits as While My Guitar Gently Weeps and Here Comes The Sun. The Quiet Beatle disagreed with Paul McCartney over one track on Abbey Road, however.

The song in question, Maxwell’s Silver Hammer, was one of Paul’s compositions for the record.

The track included a collection of subtle guitar notes, as well as some extra background noises involving metal shards.

Paul’s wife at the time, Linda McCartney, said the track was his experimentation with the "avant-garde".

He himself said the song was “my analogy for when something goes wrong out of the blue, as it so often does, as I was beginning to find out at that time in my life".