"The Beatles: The Night That Changed America," the CBS special that commemorated the 50th anniversary of the Beatles' debut on "The Ed Sullivan Show," received six Emmy Awards nominations Thursday morning.

The special, produced by CBS and AEG Ehrlich Ventures, is up for Outstanding Variety Special and in the categories of direction (Gregg Gelfand), music direction (Don Was), writing (Ken Ehrlich, David Wild), lighting design and sound mixing. In the composing world, John Lunn will attempt to win his third consecutive award for "Downton Abbey," the opening number of the Tony Awards is angling for a hat trick and T Bone Burnett has received his first Emmy nomination. Lunn and Burnett, who wrote for HBO's "True Detective," are up for Outstanding Music Composition for a Miniseries, Movie or a Special along with Jeff Beal (his second nomination for "House of Cards"), Ramin Djawadi ("Game of Thrones") and first-time nominee Alan Silvestri ("Cosmos: A SpaceTime Odyssey"). David Arnold and Michael Price, nominated twice before for their work on PBS's "Sherlock," a details

In writing about what's being called “the train song” in the Beatles’ film “A Hard Day’s Night,” and recent efforts to identify the musicians who recorded it, at least one reader commented, “Why doesn’t someone simply ask Paul or Ringo?” a sentiment echoed by numerous others.

My response to some was “No one ‘simply’ asks a Beatle anything,” knowing from experience the hoops that must be cleared to gain access to them. I also discussed the very real prospect that Paul and/or Ringo might understandably not recollect a 42-second snippet of music they could have recorded half a century ago.

But this week, circumstances arose that allowed me to pose the question directly to one of the two surviving band members 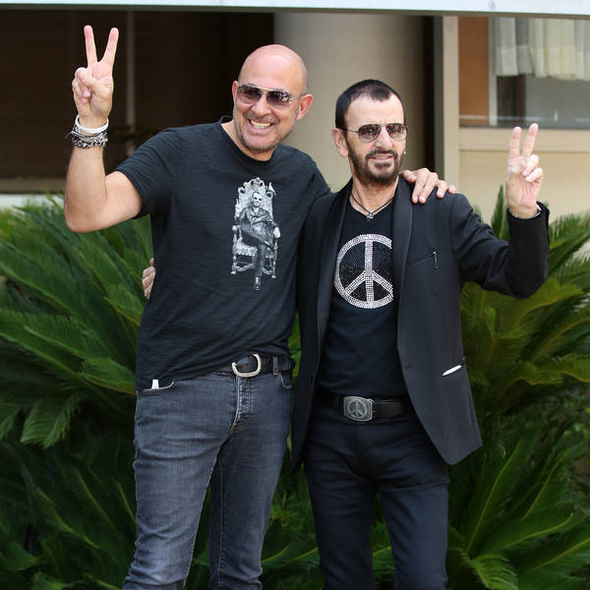 The former Beatles star is the face of Varvatos' 2014 Peace Rocks autumn fashion collection, and the rocker announced the news during a rally in Los Angeles on Monday (07Jul14) to mark his 74th birthday.

In a black and white promotional picture for the drive, Starr wears sunglasses and a leather jacket and pulls his trademark 'peace' sign. Each campaign snap will be accompanied by the #PeaceRocks hashtag. Fans are encouraged to post 'selfie' snaps of themselves making the peace finger gesture on Twitter.com and every time the hashtag is used, Varvatos' company will donate £0.59 to the Ringo Starr Peace & Love Fund, which supports Lynch's foundation. The moviemaker's charity promotes the use of transcendental meditation in public schools and for members of the military. Starr also appears in a short film for the campaign in which he sits behind a drum kit and talks about his musical aspirations as a youngster.

SAN DIEGO — Paul McCartney will bring his “Out There” world tour to Petco Park Sept. 28 — the first time the Beatles legend has played San Diego since 1976. “We are thrilled to welcome Paul McCartney back to San Diego for the first time in nearly four decades,” San Diego Mayor Kevin Faulconer said. “Petco Park has served not only as home to the San Diego Padres, but as the backdrop for countless memorable moments for families and visitors to America’s Finest City. Paul McCartney’s upcoming show may be the most memorable yet.” Tickets range from $23 to $253.50 and will be on sale to the general public July 18 at 10 a.m. 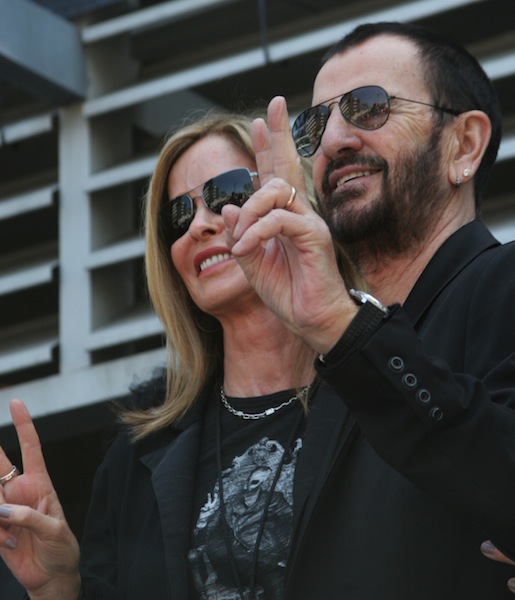 Here in Hollywood, where we see stars and icons every day, there are still none that touch the pantheon of The Beatles. And so the excitement was electric all morning, as it was Ringo Starr’s 74th birthday, and the Beatle himself was here.

In a continuation of his pacific tradition, he met with friends and fans both in front of Capitol Records on Vine Street in the heart of Hollywood to give the old peace sign – a sign he’s continued to flash through the years as it has faded and returned to mass consciousness – at 12 noon, urging fans around the world to post peace sign photos at #peacerocks.  The occasion is a tradition that Ringo has started each year to promote peace and love. This year he also used it to launch his new role as a “male model” for a John Varvatos ad campaign. It’s a campaign he is participating in because it will raise significant money and awareness for the Dav details

Central New Yorkers no longer need to go all the way to Hollywood's famous Chinese Theatre to see their favorite celebrities' handprints. The Turning Stone Resort & Casino launched its new Hands of Fame exhibit on Monday, which will memorialize musicians and other performers who come to the Verona, N.Y. entertainment venue. And the first handprint on display is none other than one of the Beatles.

Ringo Starr, who celebrates his 74th birthday today, created the inaugural handprint after his performance at the Turning Stone Event Center last month. "Turning Stone is incredibly excited and honored to launch our Hands of Fame display with the handprints of beloved rock and roll hero Ringo Starr," Oneida Indian Nation Representative Ray Halbritter said in a statement. "We look forward to seeing the collection grow and expand alongside Turning Stone Resort Casino for many years to come." Fans can now see Starr's handprint and (soon) other stars inside The GIG, the new rock club that opened last year with alongside other Exit 33 venues the Tin Rooster, Turquoise Tiger a details

"Early Days" is one of the highlights of Paul McCartney's most recent album, 2013's New, but its music video — which you can watch exclusively here — might never have happened if it was left up to McCartney. "When I've got a song, I don't think about the video," the singer says. "I'm sure some people do, but I don’t. I just think about the song, first writing it, then recording it."

Earlier this year, though, director Vincent Haycock sent over a video treatment for "Early Days" that caught his eye. "It's a memory song for me, about me and John in the early days," McCartney says. "But Vince came up with this great idea: Instead of having young lookalikes of me and John walking the streets of Liverpool, guitars slung over our backs, and literally acting out the song, what if it was any two aspiring musicians? I thought that was such a cool idea." Haycock spent a month scouting locations in Natchez, Mississipi, and Faraday, Louisiana, and casting local actors details

, who managed The Beatles from 1962 until his death in 1967, was honored Sunday in London with a , a historical marker linking notable figures of the past to the buildings where they lived and worked. London's  began erecting the memorial tablets in 1867, attaching the earliest to the birthplace of. 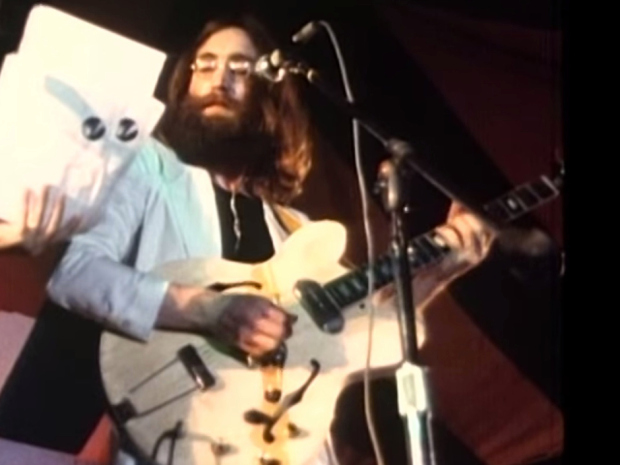 Over the next two months, more than five million foreigners will come to Canada on their summer vacation. For the rest of the summer, theNational Post presents this series on the revolutionaries, luminaries and criminals who have taken time out from shaping world events to pay us a visit — and how that visit shaped them. Today, how a Toronto rock concert killed the Beatles:

In August of 1966, the Beatles had just arrived in Toronto for a pair of appearances at Maple Leaf Gardens that, unbeknownst to the world, would be among their last. Prior to the shows, in a press conference at the arena’s Hot Stove Lounge, a reporter asked John Lennon if the band — who had failed to sell out the 16,00-seat venue — would ever split up. “We obviously are not going to go around holding hands forever,” he replied, eliciting laughter from the assembled press. Lennon added, more seriously, “we’ve got to split up or progress … it might happen. It’s quite possible.” The Toronto reporters could not have known, but by the details 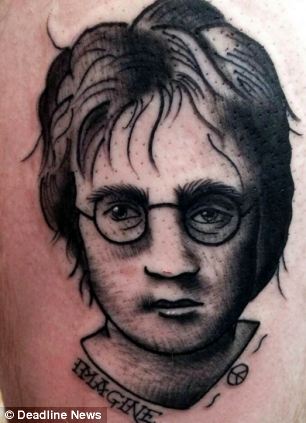 It is unlikely that the artist intended drawing the popular fictional wizard after including the word 'Imagine' and a peace sign underneath the dubious portrait. A charitable Matt McFarlane said the image resembled 'a young John Lennon', although another user suggested Harry Potter would be able to 'magic all the spots away'.

Blue, manager of the Into You tattoo studio in Clerkenwell, London said: 'Obviously this is the work of a very bad tattoo artist. It is unforgivable for a client to go in looking for an image of John Lennon and go home with Harry Potter. 'Before getting any tattoo a client should fully research the studio beforehand. There are very good studios with excellent artists. They will have extensive portfolios in the studio and in many cases online so you can assess the quality of this work. 'In cases such as this, it is possible to get the tattoo removed by laser although that is incredibly expensive. Maybe it would be cheaper for the person involved to buy a few Harry Potter books and become details